Web Stack is comprised or four main components. Certain components manage the print environment and release print jobs. Other components enable end-users to install drivers on their workstation, or the administrator to manually update drivers already installed on workstations. 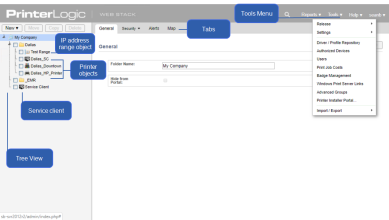 For example, HP releases a new driver for several of your printers; your PrinterLogic administrator updates the driver, the Client(s) recognize that there is an updated driver and the HP driver already installed on the workstations is automatically replaced with the new one. The connection between Web Stack and the installed Client(s) is what enables the driver update to occur.

The Client runs in the background on any workstation that has it installed and should not require any intervention on the part of the end user.

If you have ever worked in an unfamiliar environment, and you wanted to print a document, you know it can be a painful process to figure out where the drivers are located and whether you have permissions to install them. What if you could simply open a web page to install drivers for the printer just down the hall from the conference room in which you are working? Well, that's what the Self-service Portal does - it enables you to install drivers without asking anyone for help. The following image is a sample of the Self-service Portal.