Not so long ago, adding printers to your workstation was nothing short of inconvenient. Believe it or not, some people still work in organizations that continue that same struggle. For example, let's suppose your company moves your team from the first floor to the second floor of your building. Because your IT department set up your computer to use the printer on the first floor, you are not yet set up to use the printer on the second floor. So what do you do?

Well, if your IT department is proactive, then they will send you an email with a link and a procedure to install the drivers for the printer on the second floor. However, because most IT departments are frequently overwhelmed, this email does not necessarily arrive, and in the end, the responsibility to find and install the driver lies with the end-user. There is an easier approach. The Self-service Portal resolves every one of these issues for both the print administrator and the end-user. The image provided below shows a sample of the Self-service Portal. This tool enables you to install printer drivers from a map of the floor plan for your office.

For Windows there are a few different ways:

For Mac there are a couple of options:

When you have successfully accessed the Self-service Portal, you will see that it is broken into three main "parts," each of which is defined in the following sections.

The hierarchy on the left side of the Self-service Portal window is called the tree view. The purpose of the tree view is to enable you to navigate to your location to find your printer so you can install it. Using the image to the left, let's set up an example that helps clarify this point. Suppose your company has offices in four countries, namely the United States, Germany, China, and Mexico. The tree view in the image shows a folder for each of these locations. Furthermore, in the United States, your organization has offices in New York, San Francisco, Seattle, and St. Louis as shown in the sample image. The idea here is to enable you to navigate to your specific location to be able to select a printer for installation.

Keep in mind that your print administrator sets up and manages the tree view. You may have an office that doesn't appear in the list. If that is the case, then your administrator has "hidden" it from view for a very specific purpose. After you have successfully navigated to your location, you may or may not see a map of the actual floor layout. See Map below for details.

The purpose of the map is twofold. First, the map is an image your PrinterLogic administrator has uploaded via the Admin Console, so when you view it in the Self-service Portal, you can see the layout of your location. This can be useful when you are in a new and unfamiliar setting.

You may recognize actual printers that don't appear on the map. Your PrinterLogic administrator determines which printers appear as icons on the map, so a printer may be hidden from your view to prevent you from installing it.

Look closely at the map to the right. Not only do you see office detail (including desks, offices and conference rooms), you see print icons added as well. The detail that appears in the Self-service Portal depends on the source file image your PrinterLogic uploaded through the Admin Console. In other words, an unintended mark or icon on the uploaded image will appear in the Self-service Portal, so if you click an icon and nothing happens, the icon may have been on the uploaded image.

Each printer icon on the map, if properly added, represents an actual printer at a location. In the image to the right, the New York City folder is selected in the tree view and the user's mouse hovers over the color printer in the New York office. By clicking Install Printer, the Self-service Portal will take you through a quick installer to install the printer drivers for that printer on the end-user's workstation.

Now, let's say you select a folder in the Self-service Portal tree view, but no map appears for that location. If this occurs, either the folder is configured such that no printers can be added, or the administrator has not uploaded a map for the selected folder.

If a selected folder does not display a map, the printers will still appear in the list for you to download. You just won't have a map and an icon from which to download the printer. For example, if your PrinterLogic administrator has not uploaded a map to the Manhattan folder, you can still download the drivers from that location. The drivers will appear as line items in the Self-service Portal.

The menu in the upper right corner of the Self service Portal provides quick access to printers so that you can set a specific printer as your default, to delete a printer, or to view the printers you currently have installed on your workstation.

Finally, the client on your workstation is set to regularly "check in" with PrinterLogic. However, the Self-service Portal menu provides the Refresh Configurations button to enable you to manually force the client to check in with PrinterLogic. This update option can be useful in cases where your administrator has updated a driver that you want or need immediately. Rather than waiting for the next time the client checks in, you can force it to go out and grab the updated drivers. 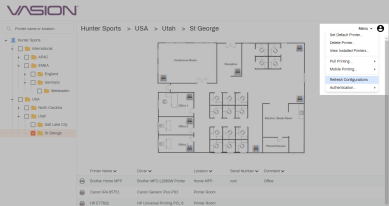